How does git stash work under the hood?
How to view the untracked files in a stash?

Say you want to set aside your current uncommitted work in order to fix an urgent bug, or jump on another branch temporarily then come back to what you were doing later on. This is where git stash chimes in to provide a way to do this and restore it later on.

In the example below, my working directory is dirty which means there are unsaved changes in the working directory.
Switching to another branch without cleaning things up beforehand would bring these changed files into this other branch.
To prevent that I will use git stash before switching branches, to start off a blank slate.

We may need a bit of terminology refresher in this post. Feel free to skip ahead and come back later if needed.

Here is the shell script I used to create the repository for this example. You may find it helpful to practice the git stash command line options starting off a pre-configured playground.

Now let’s take a look at the status in the working directory and the Index after running the above shell script.

Here is the output of git status right before running any of the git stash command.

Below is the text version of the above image.

This section assumes that:

The table below describes what files are stashed and where (commit) depending on which git stash command is used.

Now, let’s take a look at what each git stash command does.

By default, git stash sets aside:

It does not set aside files that are either untracked or ignored like respectively LICENSE and temp/stash.out .

To also stash the untracked files, use the -u option.

git stash -u sets aside the:

That is all the files except the ones that are ignored.

To also stash the ignored files use the -aoption instead of -u.

git stash -a sets aside all the files, that is:

Now that we know what is stashed, let’s take a look at the way it is stored internally.

What is in a stash?

Let’s figure out what is in our most recent stash.
Let’s assume that we ran git stash -u in the example’s repository so we end up with this log. 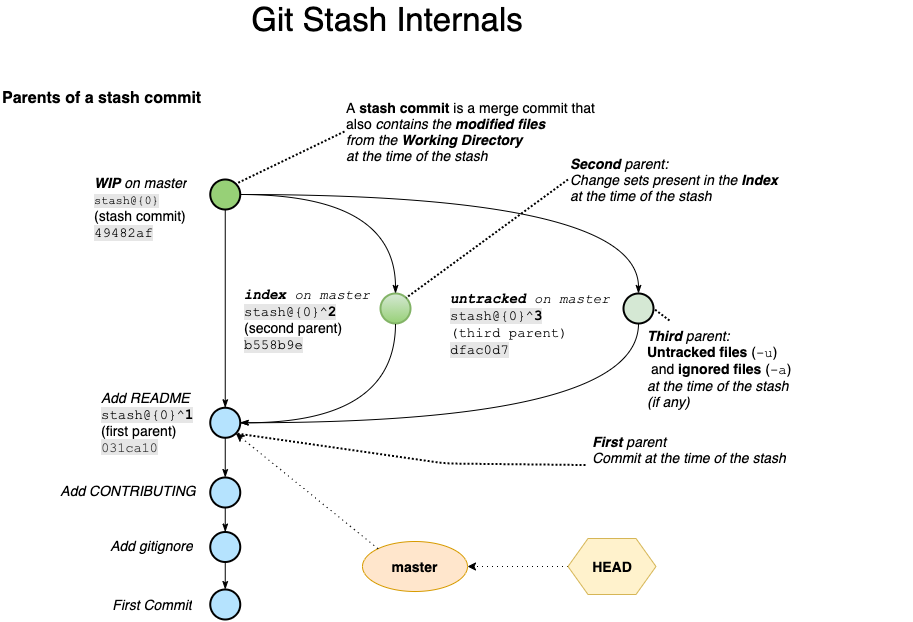 The stash commit stash@{0} (49482a) is a merge commit with 3 parents in this case because we stashed the untracked files, (2 parents by default).
It also contains the non ignored files of the working dir that were modified at the time of the stash.

Why do we need to dive deep into the inner workings of git stash?

Up until version 2.32, git did not offer a simple way to list and show the untracked files in a stash commit. This is why we need to know the git stash internals to do this. You are now ready to understand what is next.

Files of a Stash Commit

Now, let’s use the command line to list the files saved in a stash:

Modified Files in the Working Dir of a Stash Commit

Here is how to list modified files in the Working Dir of the most recent stash commit:

Here we drill down on the merge commit (-m) and focus only on the first commit (-1) of the first parent (--first-parent), that is the stash commit itself.

ℹ️ By default, git log does not display details about any parent of a merge commit, unless we use -m and when we do use this option, it displays what is requested for each and every parent. As this is not what we want here, we restrict only to the first parent..

For whatever reason, even with --name-only, git log displays non requested information (commit SHA1, date, and author) in addition to the file names. I noticed this issue in git version 2.32.0. This is why I use --format='' as a workaround to remove them.

Now, here is how to view what changed in the modified files of the Working Dir of the most recent stash commit:

Staged Files of a Stash Commit

The command below lists the staged files of the most recent stash commit.

In order to get the content of the (changesets in the) Index in this stash commit:

Untracked Files of a Stash Commit

Here is how to list the untracked files in the most recent stash commit.

From git version 2.32 onwards git show now has the --only-untracked option to list the untracked files of a stash.

Before git version 2.32, we should have used instead one of the following 2 alternatives:

Here is how to view the content of the untracked files (and ignored file(s) if any) in the most recent stash commit.

From git version 2.32 onwards you can use the --only-untracked option of git show.

Before git version 2.32, use instead:

Ruby on Rails and Blockchain Developer

Ruby on Rails developer at S4M